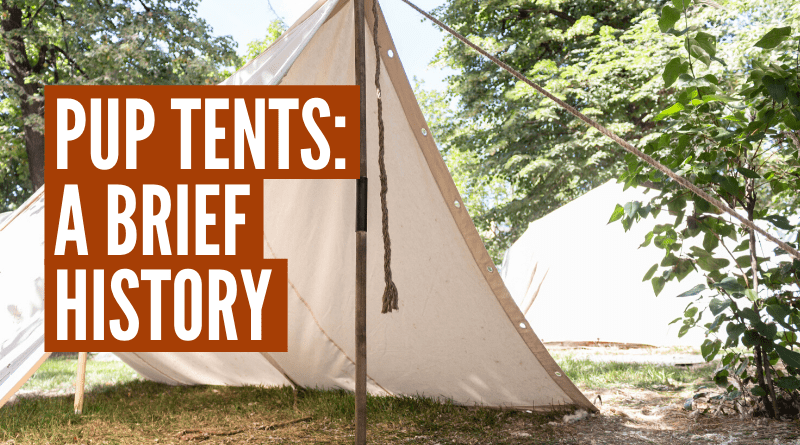 A pup tent, also known as a shelter-half, is an extremely simple type of tent that provides temporary shelter.

This camping staple varies in size and use and has become iconic in the world of camping.

What Is a Pup Tent?

The first pup tents lacked any waterproof elements, which exposed their inhabitants to leaks during the rainy season. Modern pup tents, however, keep out water so you can stay dry all night.

Setting up a pup tent requires minimal work. Unlike larger tents, they do not have enough space to divide the inside into sections, and the materials for setting them up are light. When you combine the whole set – poles, cover material, and stakes – up tents only weigh about ten pounds.

They are easy to carry for soldiers, trainee soldiers, avid campers, mountaineers, and anyone who regularly participates in outdoor activities on foot.

Why Is It Called a Pup Tent?

According to their history, pup tents got their name from American Civil War troops. During this time, military troops used the word dog to refer to their essential accessories. Tents fell into this group, as did their dog tags.

As walking was the primary means of transport, the soldiers needed a lightweight tent made from a material that was easy to carry. Hence, the pup tent—a smaller, lighter version of a regular tent—became a part of their essential commodities.

As with other items, the military associated the dog with a tent. Some troops, such as the Chattanooga Infantry, even dubbed their shelters dog houses. Later, the name changed to pup tents.

Some say that the name for these tents came from the soldiers’ description of the tents’ accommodation being more suited to a dog than a human since early versions of these tents had no floor and were prone to flooding.

A Historical Timeline of the Pup Tent

Military troops were the primary innovators of these tents. As they went into their various battlegrounds, soldiers needed a shifting shelter, as most of them were infantry without horses for transport.

As such, the troops had to come up with a way to carry materials that could quickly make a temporary shelter and store their firearms.  This need gave rise to the pup tent, and with time the tent changed in design and type.

The Pup Tents of the American Civil War

The first versions of the pup tent were standard in the American Civil War and the Revolutionary War.

These tents served as basic shelters and did not have doors. Instead, both sides were open, and the material used to make them was prone to rotting.

In harsh weather and windy areas, the tents could disintegrate quickly with rainwater penetrating and flooding them. Troops often used their rifles or sturdy tree branches to prop these tents up.

These tents came with pole frames to replace the rifles and tree branches earlier used as prop tools. Similarly, the Korean War furthered innovation in the design of this tent, changing the tents’ color from khaki to dark green.

During this time, manufacturers began painting the tent poles to match military camouflage regalia. The tent material also improved, making it suitable for use during windy and rainy seasons.

The Vietnam War posed a challenge to soldiers and the way they could use the pup tent.

Due to harsh tropical weather, troops had to come up with new ideas to use their tents efficiently and effectively. American soldiers that fought in this war invented the A-shaped frame using two poles, which made the tents spacious and more comfortable for soldiers.

Ultimately, the Vietnam War design inspired the modern pup tent’s design with a sturdier A-frame and mosquito nets inside.

Today, pup tents are durable and lightweight. Their use has expanded beyond the military, and now all manner of outdoor enthusiasts use them.

These modern versions also come with a floor and a mosquito net, and they’re waterproof. The design improvements that came with years of military use have made these camping essentials portable. Now, they keep campers safe and protected outdoors.

Camper FAQs is reader-supported. Buying through links on our site may earn us an affiliate commission. As an Amazon Associate I earn from qualifying purchases.

Get Our Free Weekly Newsletter!

By subscribing you agree to receive emails from us. We will always respect your privacy and you can unsubscribe at any time.